This is a historic day, says CEO of Xfiber Tore Garborg. Previously, almost all Norwegian internet traffic has been routed via Sweden. With our new internet connection, we increase the number of routes in and out of Norway,  while opening up to brand new applications and opportunities for Norwegian and foreign companies.

A North-Sea direct line give internet users significant improvements in latency to a number of internet services.

Faster data center connectivity
The improvements in latency we achieve with this direct-line are especially important for cloud-based services like Apple, Amazon Web Services, Microsoft Azure, and Office 365. Several of the major service providers like Microsoft, Google and Apple are located in the UK and Ireland. With our new connection, these services can be reached much faster.

The new connection will not only make it much faster for users in Norway to reach abroad. Of course, it also works the opposite direction. An Internet user in Europe and the UK is now able to cut latency to green and clean hydro-powered Norwegian data centers and service providers by up to 75%.

London is an important internet junction
London is one of the largest and most important Internet hubs in the world,  our tests show significant improvements in performance to almost all countries and services. Xfiber is now directly connected to the London Internet Exchange (LINX). This is one of the largest internet exchanges in the world and connects all UK internet suppliers, and a range of service providers from all over the world. 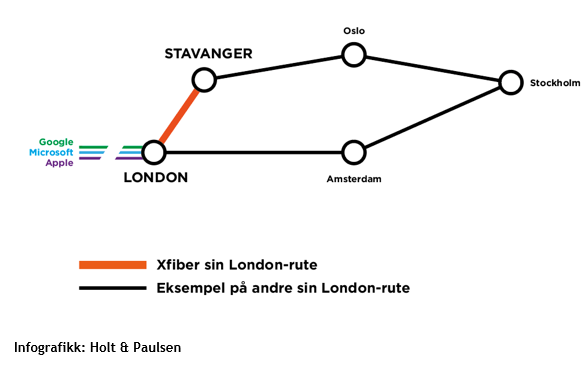